« back to articles
published on November 29, 2009 by Antonin Hildebrand
TotalFinder - alpha call for testing!

TotalFinder is my attempt to make Finder.app better for programmers and Mac power users. I want it better for myself!

I use Finder as my primary file manager and I have many small ideas how could I make it better. But my ultimate goal is quite ambitious. The goal is to extend Finder to support dual-panel mode like Total Commander. People around me are leaving Windows for Macs and asking for a Total Commander replacement. Need to hurry! :-)

Before you install it, open terminal and prepare this command:

There is a chance that during startup TotalFinder crashes and brings down whole Finder.app. The problem is that there is a process continuously starting Finder.app if it is not running somewhere in OSX. So it ends as an infinite loop of Finder.app starts and crashes until you remove TotalFinder SIMBL.

You were warned! Stay sharp! 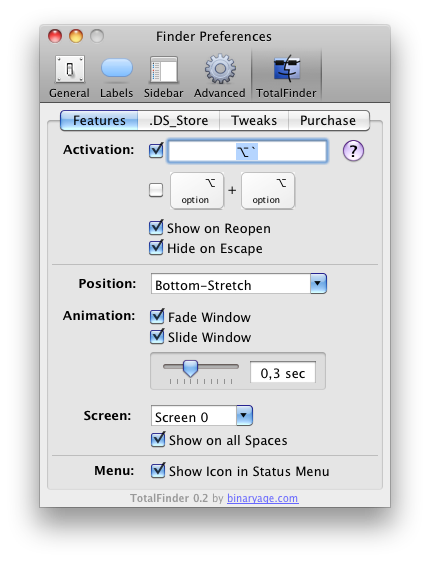 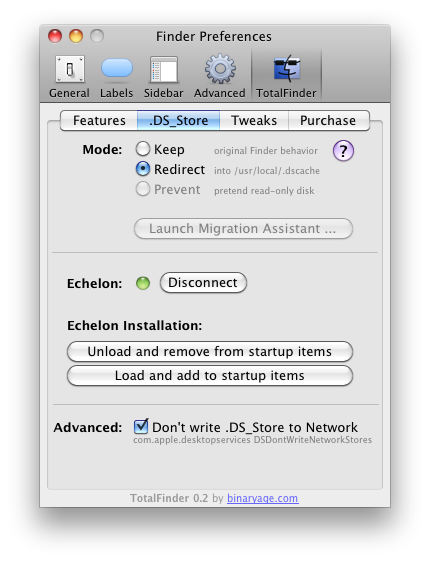 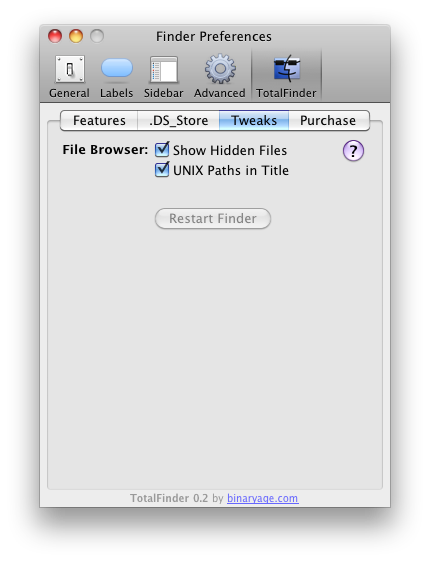 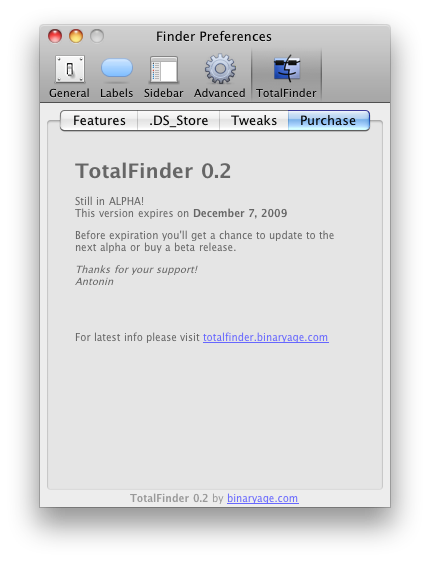 As you can grasp from the images this version implements two main features:

And you can also see that I’m planning to start selling this at some point in the future when the thing gets more stable.

How does .DS_Store redirection work?

I’m pretty excited about solving the problem which has been bugging me for more than two years since the day I switched to Macintosh. Every single day!

Look, I use Finder.app with enabled hidden files and I’m also pretty heavy Terminal.app user. The .DS_Store litter makes me cry! If you ever happened to google for a solution, you could find just some simple scripts for deleting .DS_Store files (futile!). Or maybe there is some commercial app which is capable of watching filesystem and deleting them after creation. But this is not good enough for me! I’m using folder colors in Finder ;)

Here is what I did in TotalFinder:

Yeah, kernel extension sounds scary. But I didn’t find a better solution in user-space. FSEvents are not precise enough (it just reports “something was changed”). BSD kqueues must be registered on per-file basis, so it is not usable in this scenario. At the end of the day that kernel extension turned out to be a really light-weight solution. I use KAUTH API to monitor kernel filesystem events. I do it only if TotalFinder is connected and only for renames and deletes. Testing is a simple C-string comparison and sending notification via socket.

I’ve been using TotalFinder with this redirection enabled for a while and it works pretty well. I’ve noticed only two drawbacks so far:

I hope this is enough info for you to get started playing with TotalFinder. Your feedback is appreciated!

I’ve fixed tons of Visor bugs and made it possible under Snow Leopard. Now it is your turn to help me roll this out :-) Thanks!